For centuries, the historic Buddhas of Bamiyan stood guard over the Bamiyan valley in central Afghanistan. These two massive sculptures—one measuring 115 feet in height, the other 174 feet—were carved directly into the valley’s sandstone cliffs approximately 1,500 years ago.

Visitors came from around the world to view these unique examples of Afghanistan’s Buddhist heritage. However, years of fighting and conflict took their toll on the Buddhas of Bamiyan. Unfortunately, the statues were destroyed in 2001, an incident that was devastating for Afghanistan’s cultural heritage.

Today, however, a bold new initiative is in development that aims to pay homage to the legacy of the Bamiyan Buddhas and to put the Bamiyan region back on Afghanistan’s cultural map. The Bamiyan Cultural Center, a project initiated by UNESCO in collaboration with Afghanistan’s Ministry of Information and Culture, is intended to serve as a hub for culture and creativity in Afghanistan and to contribute to a vital national discussion on the past, present, and future of the country’s cultural heritage. Read on to learn more about this exciting project.

What is the vision for the Bamiyan Cultural Center? 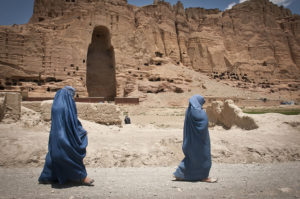 The Bamiyan Cultural Center is envisioned as a vital space for a wide range of activities and programs around the topics of cultural diversity, cultural heritage, and the future of cultural identity and cultural preservation in Afghanistan. The Afghan government, like many of the country’s citizens, believes that sparking conversations around these topics is an essential part of rebuilding and redevelopment efforts, and that the thread of culture and heritage is one of the most important in the fabric of civil society.

Practically speaking, the Bamiyan Cultural Center will be home to two gallery spaces (focused on Afghan archaeology and similar cultural subjects), an auditorium for live performances, a tea house, and an extensive outdoor garden. The Center will host a variety of events—from speakers and lectures, to regular exhibits, to special displays like the Kabul Photo Biennale. When it is complete and operational, the Center will benefit many stakeholders from a wide demographic, including schoolchildren, visiting scholars and researchers, and national and international organizations.

Who will design the Bamiyan Cultural Center?

In 2015, after being flooded with a remarkable 1,070 design entries from 117 different countries, UNESCO and the Afghan Ministry of Information and Culture chose a proposal from an Argentina-based architectural team as the winning design. Carlos Nahuel Recabarren, Manuel Alberto Martínez Catalán, and Franco Morero won over a panel of distinguished jury members with their proposal, entitled “Descriptive Memory: The Eternal Presence of Absence.”

The vision of the Descriptive Memory proposal is of a generous public park that extends out to meet the rooftop of the Cultural Center, which is imagined as a sunken building complex which surrounds a public plaza and is bordered by a reflective pool. As the architectural team described in a statement, its vision was inspired by the image of a meeting place where ideas can be shared and communicated, and which highlights the impressive surroundings of the Buddha Cliffs.

Thus, rather than imposing a newly-built structure on the landscape, the team is working very much with the notion of the Center as something that is “found” or “discovered” by carving it out of the ground. This strategy ensures that the building is fully integrated into its environment. It also pays homage to the area’s ancient building traditions.

In choosing this proposal as the winner, the jury particularly praised the design’s well-conceived plan and sensitive site strategy that minimizes the structure’s visual impact; the choice of brick as the designated building material; the Center’s elegant curving passageways; and the project’s appropriate consideration of scale and feasibility of construction. The design has been endorsed by Afghanistan’s president, Ashraf Ghani, who also took the opportunity to reaffirm his commitment to protecting the country’s cultural heritage through the announcement of a national program to support cultural diversity.

Who is financing the Bamiyan Cultural Center? 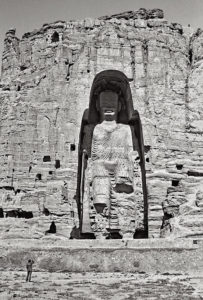 Financing for the main complex of the Bamiyan Cultural Center—which has a projected cost of US $2.5 million—is being provided by the government of South Korea. The Afghan Ministry of Urban Development and Housing is supplying an additional US $1.5 million for the creation of the outdoor areas, including the gardens and public park.

Why is the Bamiyan Cultural Center important?

Initiatives like the Bamiyan Cultural Center, with its focus on national unity, cross-cultural awareness, and the safeguarding of ancient heritage, are hugely important elements in the broader process of reconciliation, peace-building, and economic development in Afghanistan.

In addition, the Bamiyan Cultural Center is expected to make a valuable contribution to Afghanistan’s socio-economic development by revitalizing visitor interest in the Bamiyan valley, which remains a UNESCO World Heritage Site even without the famous Buddhas. Finally, the Center will encourage local residents to participate in tourism-oriented efforts that will help grow their communities and showcase their ancient heritage.