Positioned at the crossroads between the Indian subcontinent, central Asia, and Iran, Afghanistan has always been something of a meeting and mingling place for different cultures. Almost every aspect of Afghanistan’s own cultural heritage, from the country’s cuisine to its architecture, reflects this long-standing influence of different traditions, and its music is no exception. Read on to learn more about the role of music in Afghanistan, including a history of the country’s musical development and a look at some traditional Afghan instruments.

What role does music play in Afghan culture? 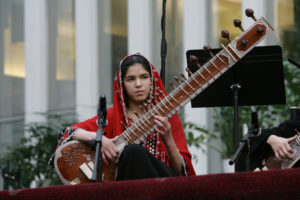 The meaning of music in Afghan culture is more narrowly defined than it is in the Western musical tradition. In Afghanistan, traditional music is always secular rather than religious; it is primarily an instrumental form with only some use of the voice; and while it is sometimes performed by amateur musicians, the main performers of traditional music are professional musicians.s

It’s important to note here that what differentiates a professional from an amateur musician is not professionalism or skill, but the birthright and level of musical education that come from being born into a family of musicians. In this sense, being a professional musician is a hereditary concept in traditional Afghan culture. What this means is that many things that would be considered music by a Western audience, such as lullabies for children or folk songs, are not thought of as formal music by many Afghans.

This is not to say that folk songs and regional melodies are unimportant in Afghan culture. On the contrary, Afghanistan’s diverse regions have a rich history of folk music that has been profoundly influenced by the musical styles, genres, and instruments of their neighbors, including Iran, China, Uzbekistan, and Tajikistan. For example, the folk music of western Afghanistan is very closely related to Iran’s folk traditions, while many of the folk songs in northern Afghanistan are sung in Tajiki, Uzbek, or a mixture of the two languages.

Afghanistan’s long-standing musical history covers a wide spectrum from simple folk songs on one side to court musicians playing in the classical music tradition of Kabul on the other. This changed, however, in the mid-20th century. Young students who were exposed to Western music began bringing some of those instruments and styles to an Afghan audience. The period from the 1950s to the 1970s has become known as a “Golden Age” of music in Afghanistan, when a unique style mixing classical Afghan and regional folk instruments with Western instruments was developed by musicians playing for the national orchestra on Radio Afghanistan, the government radio station that served as the unifying voice of the nation during this period.

During Afghanistan’s conflict years, which began with the Soviet invasion in 1979, many musicians fled the country, and music was widely banned. Recently, however, Afghanistan has been experiencing what many are calling an “International Age” of music. Afghan artists and the general public alike now have access to international music through the Internet, satellite radio, and television. At same time, they are rediscovering their musical heritage and reviving traditions that date back to the Golden Age of music and beyond. A wonderful example of this new musical tradition is the Afghanistan National Institute of Music (ANIM), a school specializing in music training in both Afghan and Western traditions, led by an international faculty.

Part of ANIM’s mission has been to revive the use of and appreciation for traditional Afghan musical instruments. These include:

The rabab or rubab—The national instrument of Afghanistan, the rabab or rubab is a type of double-chambered lute carved from a single piece of wood. A membrane covers the hollow bowl of the sound-chamber, and there are over 20 strings, including melody strings, drone strings, and sympathetic strings. Traditionally, the rabab is made from mulberry or rosewood, the membrane is of goat skin, and the strings are gut strings, although nylon is now more commonly used. The origins of the rabab can be traced back to the 7th century in central Afghanistan; the instrument is featured in many folk songs and classical melodies, and is often referred to as the “lion of instruments.”

The ghichak—This two-stringed fiddle has a body made from a large metal tin, giving the instrument a distinctive sound. Played with a horsehair bow called a kaman, the ghichak is popular in Afghanistan’s central and northern regions.

The tula—This wooden flute is one of the simplest instruments in Afghanistan’s musical tradition. Its frontal plane features six finger holes, while a single thumbhole is located on the dorsal plane.

The tabla—The principal percussion instrument in traditional Afghan music as well as in classical music from northern India, the tabla are a pair of hand-played wooden drums that can be tuned to different precise pitches.