Although Central Kabul may not be the first place where you would expect to see hundreds of springtime roses in bloom, that’s exactly what you’ll find at Bagh-e Babur, also known as Babur’s Gardens. The largest public green space in Kabul—with a history that stretches back more than five centuries—Babur’s Gardens are not only a beautiful and peaceful oasis, but one of the finest living examples of Afghanistan’s commitment to renewing and restoring its cultural heritage. Read on to learn more about this beloved Kabul landmark. 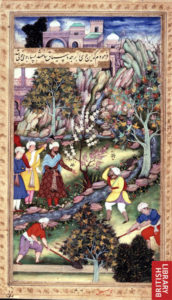 Babur, the founder of the eponymous gardens, was born in 1483. A descendent of Genghis Khan and the nomadic leader and conqueror Tamerlaine, Babur became the first Mughal emperor and the head of a dynasty that ruled much of South Asia for two centuries. The Mughal empire consolidated Islam and advanced the reach of Persian arts and culture in the region.

In 1504, Babur captured Kabul, which served as his capital for two decades. An avid gardener and nature enthusiast with a passion for flowers and landscape, Babur was personally involved in the design and creation of at least 10 gardens in the city during his time there. The site now known as Bagh-e Babur—one of the oldest surviving Mughal gardens—was previously the location of a monumental building dating back to the third century BC.

Babur died in 1530 in the Indian city of Agra. Prior to his death, he expressed a wish to be buried in Kabul. Around 1544, his widow finally transferred his body to that city, where he was interred in Babur’s Gardens. Historians and archaeologists speculate that the presence of remains of older tombs in the building on which these gardens were constructed may have inspired Babur’s decision to be buried there rather than at one of his many other gardens. As the home of Babur’s tomb, Bagh-e Babur became a symbolic and venerated site during the reign of the Mughals.

Spaces for physical and spiritual refreshment

Gardens hold a special place in Islamic culture. Echoing the ancient concept of paradise as a garden, Islamic gardens are designed as spaces for physical and spiritual refreshment. Key elements of such gardens include flowing water, shade, lush foliage, and perimeter walls. In addition, Islamic gardens follow specific principles in layout, design, and function.

Like other Islamic gardens, the 11-hectare Bagh-e Babur was originally laid out in the charbagh—or “four garden”—pattern: a classical arrangement that divides the enclosed space of the garden into clearly defined quarters through a series of rising terraces intersected by a central watercourse. The prominent central axis of the garden provided a multi-directional vista, and the trees, herbs, and flowers were all carefully chosen. 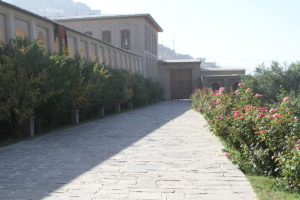 After the Mughal dynasty lost control of Kabul, Babur’s Gardens fell into disrepair. Repeated alterations were carried out on the site. One of the largest and most disruptive building programs was implemented by Amir Abdur Rahman in the late 19th century. His structural interventions, which included new buildings and landscaping, significantly changed the visual concept and feel of the garden. However, the alterations did not last long, as King Nadir Shah removed the structures in the early 1930s. During this period, the gardens were open to the public complete with European-style teahouses and restaurants. It was this version of the gardens—which sustained heavy damage as a result of looting and vandalism during the long years of civil conflict—that was preserved until the early 2000s.

In 2002, with the support of the Aga Khan Development Network, a comprehensive restoration of Babur’s Gardens was launched. Over the next five years, the majority of the physical work was completed. Improvements included re-establishing the character of the water channels, planted terraces, and pavilions; creating a swimming pool and caravanserai complex; and replanting local species of trees and plants favored by the reigning Mughals when the garden was first built. The plants ranged from roses and pistachios to the distinctive purple-flowered Judas trees.

The future of the gardens

Today, Babur’s Gardens provide a safe, secure, and peaceful urban green space for Kabul’s residents. Since it reopened to visitors in 2008, Babur’s Gardens have attracted more than 3 million visitors who come to enjoy the gardens and the ticketed events and performances that take place there, such as festivals of Pashtun dancing and even Shakespeare performances. At present, the gardens are managed by the Bagh-e Babur Trust with participation from Afghanistan’s Ministry of Information and Culture, the Kabul Municipality, and the Aga Khan Trust for Culture. The idea is that the revenue from admissions to Babur’s Gardens will help the Bagh-e Babur Trust to achieve long-term financial stability and maintain the garden’s landscaping and monuments.