Located along the historic trade routes between India, China, the Middle East and Europe, Afghanistan has a rich history of residing at the crossroad of cultures. The food of Afghanistan is a wonderful representation of the varied cultural influences. Today, after decades of conflict, the tradition of providing guests with hospitality and heaping servings of delicious food continues. Understanding the importance of the traditions and food in a culture can lead to a greater capacity for seeing the similarities between people around the world.

History of Food in Afghanistan 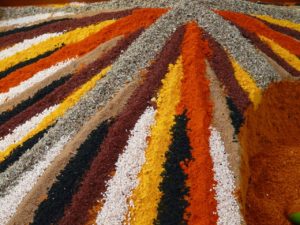 While Afghan foods have a style all their own, there are distinct influences from surrounding nations that have merged with native dishes to provide a unique flavor. Traders from India brought spices such as saffron, chilies, and garam masala (a mixture of nutmeg, cloves, cumin, cardamom, and cinnamon). Iran’s contribution was the use of coriander and mint, as well as spinach. Mongolia shared its fondness for noodles and dumplings. These new flavors, combined with the meat-rich diet necessary for this landscape of harsh winters, provide a palate of delicious, varied foods.

Afghan diets are based on rich, fatty meats and oils. Chunks of meat served on skewers could be identified as the nation’s “fast food” and can be found in nearly every street market. Long metal skewers are laced through lamb, cooked over charcoal, and served with naan. Meat dishes may also include ribs, lamb chops, or a variety of meatballs. Korma, a popular dish, consists of a base of onion and garlic, with vegetables, meat, and spices added to make a delicious stew.

Rice, which is a staple of the Afghan diet, is regarded by some as the best part of a meal. Several varieties of rice-based dishes may be served at each meal, and formal occasions such as weddings may feature sweet and savory recipes. A popular dish, Kabuli pilao, consists of a dome of rice seasoned with cardamom, raisins and nuts, and slow-cooked meat. Other dishes may include fluffy, white rice or a creamy rice pudding.

Due to Mongolian influences, dumplings are often served in Afghan homes, but are generally reserved for private meals due to the extensive amount of time that it takes to prepare them. Ashak, a vegetable filled tortellini-like pasta, is served with a garlic yogurt sauce and spicy meat. Meat-filled pockets known as mantoo are covered in a tomato sauce and served along with rice.

Considering Afghanistan’s agricultural lifestyle, dairy products play an important role in meals in the country. Nearly every meal includes some form of dairy. Yogurt is served as a sauce for meats, as an accompaniment to rice dishes, and as a dessert with dried fruit and nuts. Curds may be dried into small balls for cooking, and boiled curd is often served for breakfast. 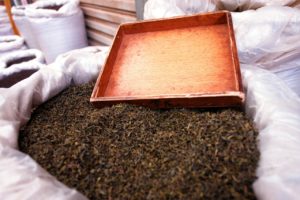 Tea, which is the beverage of choice in Afghanistan, is served with every meal. Depending on the occasion, tea may be served spiced, or with milk or cream. More formal occasions call for sugared tea to be served to honor guests, while informal meals may feature strong black tea. Tea time, which is another important Afghan ritual, consists of a midday snack of dried fruits, sweets, and pastries served with black or green tea.

Similar to mealtime around the world, Afghanistan has its own set of customs and rituals that define a typical meal. Meals in Afghanistan are typically eaten with the right hand. Instead of utensils, diners use bread as a scoop. There are two types of bread commonly used. They include a naan bread, which is deeply grooved and which has sesame or nigella seeds sprinkled on top, or a large, flat bread.

One of the most important parts of any meal in Afghanistan is the dastarkhan, which consists of a tablecloth laden with the offerings of the meal placed on the floor. Diners are seated around the dastarkhan. Members of the dining party may have certain duties, such as tea pourer, and guests are often seated near the best dishes. Customs may vary based on region and tradition, but every meal in Afghanistan is centered around the tenet of hospitality and sharing. According to traditional lore, no one was ever turned away from a meal, even if the individual was a virtual stranger to the family.

For the people of Afghanistan, there is comfort in maintaining the traditions of centuries that focus on hospitality and shared meals. For the global community attempting to find common ground with a group of people who have largely been unknown, there is a sense of camaraderie around the table, whether it is a traditional dining room table or a dastarkhan. Learning about the customs, including the food of Afghanistan, can go a long way toward building bridges that unite—rather than divide—the world.