Afghanistan’s artistic landscape is undergoing a profound transformation. After decades of conflict, during which the majority of artistic activities were repressed or banned, Afghan artists in all disciplines are reconnecting with their craft once again. Today, thanks to renewed local interest in arts and culture as well as greater international financial support for these activities, Afghanistan is home to both an exciting contemporary art scene and a reinvigorated traditional arts and crafts practice. Read on to learn more about six artists and artisans who are changing the rules of the game and showing the world the best of Afghan art. 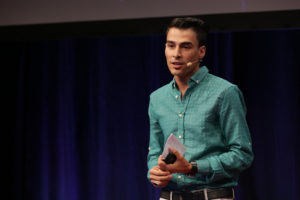 Having spent most of his childhood and youth outside of Afghanistan, Azim Fakhri returned to the country in 2002 with a passionate commitment to helping develop his country and represent his generation through the arts. His works, which he creates under the name Kabul Knights, span a variety of disciplines, including painting, stenciling, sculpture, and graffiti. Often compared with artists like the controversial street artist Banksy, Fakhri creates art that is playful and political at the same time, using surprising visual substitutions—like replacing grenades with pineapples or tank guns with clarinets—to puzzle and provoke his viewers. Once of Fakhri’s most recent projects is “Street Angels,” a photo series dedicated to Afghan children, which he discussed when he was a featured speaker at the TEDx talk series in Berlin.

Based in Herat and a graduate of the Fine Arts Faculty of that city’s university, Akram Ati mixes traditional subjects with non-traditional materials and techniques to create paintings that are both stunning and subtle. Instead of using conventional, store-bought paints, Ati creates his own paints from natural materials like mud, dust, stones, and brick, which he grinds down and mixes with a type of homemade glue. According to Ati, these natural paints are not only more durable and less dull than artificial paints, they also represent and reflect the true essence of Afghanistan’s character and struggles. The subjects he captures in his monochromatic works are traditional scenes of everyday life in Afghanistan, including villages and country landscapes, the national game of buzkashi, and traditional dances and celebrations.

Born and based in Kabul, Mohsen Hossaini draws the inspiration for his challenging works from everyday life in modern Kabul, which he describes as being difficult for ordinary people. His paintings use dark colors like black and dark green contrasted with stark red to represent what Hossaini views as the alienation of the individual in contemporary society, and the effect that solitude and lack of relationships can have on modern Afghans. In addition to painting, Hossaini is a director and an animator; his short film “Shelter,” a paper animation, was an official selection at a number of international film festivals.

Arif Bahaduri’s work stands out, literally, due to its three-dimensional texture. Bahaduri works with materials like bandages and crumpled paper to bring a sense of unevenness and tactility to his pieces, which typically represent abstract images of familiar things, like homes or tombstones. According to Bahaduri, his use of bandages and plasters is a specific choice, made to represent the pain and unhealed wounds that he explores through his art. In addition to his larger works, Bahaduri is a skilled sketch artist. His sketches of street life in contemporary Afghanistan are striking snapshots of a particular political and cultural moment.

In contrast to the artists above, Nasser Mansouri reaches back into the past for inspiration. As an artisan affiliated with the Turquoise Mountain Institute, master woodworker Mansouri is one of many traditional arts and crafts specialists working to restore Afghanistan’s artisanal legacy and rich crafting heritage. And while Mansouri may talk about being unsure of how to describe his own practice—artist, woodworker, carver, teacher, and businessman are all terms he uses—there’s little question as to the beauty and artistic value of his work. Through extensive study of historic Afghan buildings, Mansouri replicates and recreates intricate carvings and latticework, building beautiful, interlocking designs that are put together without nails. Recently, some of Mansouri’s work was featured in the exhibit “Turquoise Mountain: Artists Transforming Afghanistan” at the Freer Sackler gallery in the Smithsonian Institution in Washington, DC.

Another teacher at the Turquoise Mountain Institute (and also featured in the same Smithsonian exhibition as Nasser Mansouri), Abdul Matin Malekzadah is the newest artisan in a line of potters that stretches back hundreds of years. Malekzadah is based in the village of Istalif in central Afghanistan, which has many rich seams of clay, natural materials for glazes, and wood for firing kilns. It’s hardly surprising, therefore, that Istalif has become known as a village of potters. In recent decades, the village has been destroyed three times, but the villagers, including Malekzadah and his brothers, have always rebuilt their homes and workshops. Today, Malekzadah is proud to continue the artisanal legacy of his village, and to provide an important link between Afghanistan’s past and present.