It’s been 10 years since Skateistan, the award-winning international charitable organization that empowers young people through a surprising combination of skateboarding and education, was first launched in Kabul. In celebration of this milestone birthday, here are 10 things to know about this unique non-profit. 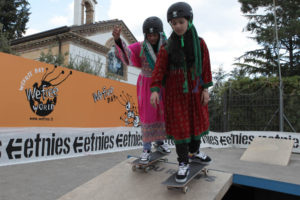 When Skateistan’s founder, Australian skateboarder Oliver Percovich, came to Kabul in early 2007, he wasn’t specifically interested in charitable or humanitarian work. His main objectives at the time were to stay connected with his then-girlfriend, who had a job in Kabul, and to continue his own work as a research scientist. But as soon as he started taking to the city’s streets on the skateboards he had brought with him, Percovich saw the great potential that skateboarding could have to build confidence and connections among Afghanistan’s large youth population. At the time, nearly half of Afghanistan’s entire population was under the age of 15.

For the first year or two of Skateistan’s existence, its “programming” mainly consisted of Percovich holding informal skateboard sessions with street kids in Kabul. This early version of Skateistan had a basic website, and relied on a few small overseas donations to support its efforts. It was during these early days that Percovich realized how much the children would benefit from better access to education. Skateistan’s mission of connecting young people with educational opportunities via skateboarding was thus born.

The connection that Percovich saw between skateboarding and education was later developed into Skateistan’s formal “Theory of Change,” an operating philosophy that was created over the course of one year using collaborative input from stakeholders, students, and staff. In essence, the theory is that if Skateistan provides fun, quality programs and safe places to experience them, then youth will be motivated to attend regularly and will consequently make new friends and take on leadership roles. As a result, they will have a stronger social support system, more life skills, and a greater level of engagement with the society around them. This theory is echoed in Skateistan’s slogan: “Youth come for skateboarding and stay for education.”

One of the main reasons why skateboarding has proved so successful among Afghan youth is that, because it was virtually unknown as a sport until recently, it didn’t carry the stigma that often surrounds participation in other activities. In Afghanistan, there are often societal pressures around who can participate in sports such as football or bike riding, but because those don’t exist for skateboarding, the sport is widely accessible to all youth.

At present, Skateistan’s activities are centered on three main programs. “Skate and Create” combines an hour each of skateboarding instruction and education in the arts. “Back to School” is an accelerated learning program for youth not currently in school; in this program, kids attend daily educational tutoring sessions on national curriculum subjects, and are enrolled in a public school after completing the program. Finally, “Youth Leadership” is a way for promising Skateistan students to take their involvement to the next level. As Youth Leaders, students assist Skateistan educators, plan local events, and build their skill sets through taking ownership and responsibility. 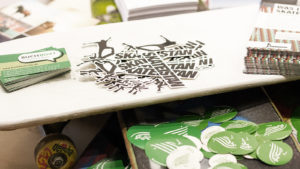 Not only does Skateistan offer the programs described above, the organization has also been instrumental in bringing new skateboarding and educational infrastructure to Afghanistan. In Kabul, a skatepark with classrooms attached was built with the support of international donors and the Afghanistan Olympic Committee. Later, a facility three times that size was constructed in the northern Afghanistan city of Mazar-e-Sharif.

Skateistan is committed to supporting underserved youth with its programming, and children with disabilities are a main focus group for the organization. A great advantage of skateboarding is that it can be practiced in some form or other by almost everyone, regardless of ability level, making it an ideal activity for youth with different physical capabilities.

To provide financial support for Skateistan’s activities, Charles-Antoine Bodson (of the social enterprise The Skateroom) came up with the idea of creating and selling skateboard art. To date, some of the biggest names in street and contemporary art have participated, including the Belgian street artist ROA and Los Angeles-based Paul McCarthy.

In addition to facilities in Kabul and Mazar-e-Sharif, Skateistan also offers programs and operates facilities in Phnom Penh and Sihanoukville in Cambodia, and Johannesburg in South Africa.

More than 1,600 youth between ages 5 to 17 are attending one of Skateistan’s global programs.